01. Svarte Greiner – The Black Dress (from the album “Knive” – Type)
02. Brian Mcbride – Silent Motels (from When The Detail Lost Its Freedom – Kranky)
03. Renderizors – Stranger At Your Party (Band version) (from Submarine – Last Visible Dog)
04. Jasper Leyland – Taken (from Carbon Series Volume 5 -12X50)
05. Marcus Schmickler – Cue (from Param – A-Musik)
06. The Drift – Nozomi (from Ceiling Sky – Temporary Residence)
07. Robert Haigh – Lost On A Train (from Notes And Crossings – Siren)
08. Burial – Night Bus (from Burial – Hyperdub)
09. Dario Antonelli – ZX-21 Part 1 (from Zaum Vol.1 – Psychonavigation Records)
10. Eluvium – I Am So Much More Me That I Am Perfectly You (from Lambent Material – Temporary Residence)
11. Stars Of The Lid – Requiem For Dying Mothers Pt.2 (from The Tired Sounds Of Stars Of The Lid – Kranky)
12. Burial – UK (from Untrue – Hyperdub)

“Lost In Thought”: dedicated to my mother, whom I have left home from, to build ledges of ascension, with my old place of residence.

SubVersion Stop 25: Do we ever make choices?

There is a cool paper out (Casasanto et al., Journal of Experimental Psychology: General. Vol 138(3), Aug 2009, page 351) where scientists tested whether people who are right- or left-handed have any biases towards objects that lie closer to their stronger hand. They set up some experiments asking volunteers to express their emotions associated with different photographs of people, places and objects, which were placed to the centre, or slightly to the right or left of the viewer. "Right- and left-handers implicitly associated positive valence more strongly with the side of space on which they could act more fluently with their dominant hands". Interestingly people made up lots of reasons as to why they thought that particular images were better, suggesting that they thought that they had reasoned it out and chosen the best option, but in fact the choice had been already made for them depending on their handedness.

It's been seen before in some older studies (e.g. Nisbett et al., Psychological Review. Vol 84(3), Mar 1977, page 231) where very similar but essentially indistinguishable items (such as clothes, electrical items, household objects etc.) were put on the right or left of viewers, and they were asked to carefully reason out which one they like best. Almost all of the participants chose the items on the right, but they gave a variety of complicated reasons as to why they had chosen the better item.

This shows that we are totally unconscious of why we do a lot of things, and are pretty good at convincing to ourselves that we have made a reasoned logical choice, when in fact we have just taken the route that was pre-determined by something deep and uncontrollable to do with our individual physiology. It's much more comforting to think that we are carving our own destiny, but maybe even the things that we like, the jobs we want, the people we think we are similar to, are all chosen a priori, and we make up comforting a posteriori logic to convince ourselves that we are our own masters.

It might be interesting to remember these things the next time we try to work out why some music sounds good (maybe we think it sounds exciting but actually the record was displayed at the right of the shop), or why we fall in love with a particular person (maybe they have mannerisms or often wear some colour which resonates strongly with our bodies, but of course we'll put it down to some profound mutual attraction).
Posted by Lata at 02:27 No comments:

http://www.everydayjunglist.biz/
Posted by Muttley at 07:37 No comments: 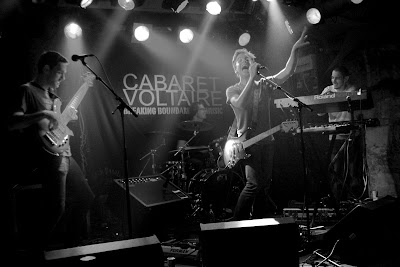 Glint was conceived by Jase Blankfort (NYC) and Mateus Tebaldi (Brazil) in New York City. This self-titled EP sees them issuing an electro-rock amalgam of Kraftwerk-meets-Muse, unfinished symphonies, taunted by paranoid guitar flex and forlorn lyrical passages. The epic "Kernel Panic", a graphically rich maelstrom of orchestral strings, percussive post-rock poise and vocal intrepidity, continually peaks and troughs as the opener, breaking down for a total of four, jolting your apex upward and downward like a see-saw.

The casual stroll / dilligent sprint meshing of (mislabeled) "Freak" squeezes oil from the painting as Mogwai encapsulated in a perpetual motion machine, Blankfort whining like an alchoholic, at odds with himself, over driving percussion, and rope-swing guitar.

The output appears tinted by asymmetrical structures that are once lopsided as they are angular, blending like rice with curry sauce. It's this spicy homogenity that populates the entireity of the EP, the poppier "Hold Still" exiting a dust-blown compartment to crash down with force on the listener, the rippling analogue, arpeggiated synth arching like a rainbow bridge from the underbelly of the procession.

Lyrically there's much to scratch beards over, particularly "I've tried this times before / I can't wait / Counting the steps I take / The hearts I break / I'm counting mistakes I make, the lies I fake / I'm willing to change my ways, take me away".

"Friends" rises from a pool of Detroit Techno glue to supplant a weighty cheerleader-wave of automated guitar persistence, searing like a lengthy burn. "Damaged Goods" which follows it, is hook, line and sinker to the record's mission statement: to prove "my love is true". There's strong backing to Blankfort's gruff deliveries, pauses for breath, with a machine-gun grunt propelling the longing onward.

If there's one thing that's lacking from this EP, it's that the barriers to enlightenment are blocked by a tendency to be oppressive. "Sound In Silence", their 2008 LP, proved they have the scope to implement lighter textures instead of a doom-engulfed emotive smog. I have a feeling that if Glint can capitalise on this fact and sow sweetness in the lining, on the same release, they will be onto something very special indeed. As it is, they don't require to trade old ideas for innovative ones; just a gentle glance at the world wouldn't go amiss.