Spacey music, wallflower music, droney music - that's what this showcase concerns. You might wonder how to connect them with a term. So I came up with something to bridge these three bases, much like I did "Attitude", "Chill", and "Deepersounds" variables for the second unofficial Subvert Central zine. That was a response to identikit sub-genre labelling without any emotion, minus any description. Or: once a description-inside-the-term is made, all descriptions that lead on cease to become relevant; it's all about the initial impulse. Enter arguments, pointless sub-labelling, ad infinitum. Creativity is fine - at least it's doing something - but regardless, you have to find a way to un-pigeonhole for a piece of art to hold any intellectual relevance over time.

So, I decided to connect two words: "transcendental introspection." At first you might think: "What the hell is that - psychobabble for hypochondriacs?" - but, looking again is the point. A drawing on your inner reserve and crossing a boundary - logical or illogical, thematic or non-thematic. Whereby the point musically is to inject fresh ideas into style, pitch and all and sundry else. To start with, here's the term in my 27th review for Fluid Radio last year:

As stated there, "applied across genres, 'transcendental introspection' alludes to postmodernist values of artistic composition – citing relativity as a conduit to alter, and monotony of subject as a course to lease". By introspecting on your creation process, you are ideally able to transcend states, whether it's finishing your track, trimming the track, blissing out to the track. An optimistic theory to live by with the positive attributes in mind - otherwise "transcendental introspection" could become a buzzword aside, fit only for describing meditation procedure. That's where the term, I found through research, originates. But as far as I'm aware, no-one else has used it in a musical framework until now.

Of course, it could be argued that this "transcendental introspection" as a quality is really just a replacement for plain old thinking. The way I like to perceive this notion, is that there has to be a middle gate, and that for something to transcend to start with, something penetrating must take place. Ultimately a differential in the linguistic make-up, as well as a preference to separate thinking and transcendence myself. To put it another way: thinking is the start of transcendence. And as such, any journalist's piece of writing can be judged on how it applies its thinking transcendentally, to whatever it writes about.

Depending how far you nosed Dubstep's voiciferous sound den 2005-2012, you'll perhaps be familiar that "bass music" is the term bandied about for transcendence through House, Techno, Dubstep and all lower tempo offshoots than Drum & Bass. This doesn't mean it can't be applied to what peaks near 170bpm, and "bass music" is indeed a good mainstay for what to expect of Absys. Then you're getting a small taste verbally; otherwise breakbeat experimentation populates the sequencing of this 13 track Dubstep and D&B melange.

Perceptually, transcedental introspection - that term again - has been lacking in Drum & Bass proper since 1993. "In almost every genre, there's good and bad. You just have to pick the gems" Cycom noted in TDD 2's 2007 interview. And this theory traces equally back as far as classical music - the punctuation mark of academic circles - or further, Neanderthal man, who was knocking pieces of rock together to make good ol' fashioned noise, post-T-Rex becoming T-vexed. Where transcendental introspection tows "Mystical Deep Vol.2", is in the credence applied to tonal juxtaposition between tunes. A constant mood maintains, flexes, ricochets: it's music where you sense each producer has introspected to bring something new out, hitherto inviting you to create your own expulsion - to own the tracks in a transcendental perspective, and hence keeping them at the front of your record crate, CD pile, or hard drive sector for longer.

A bit of extra context: Ambient music was my daily critical diet 2011-2012, and it's very rare I come across anything that excites me in D&B any more. The loss of that transcendence may well be a part: fads become re-generated heavily in this genre; pick up the journalistic template for a D&B review and most writers drop in names and tracks straight away, heretofore promoting a switch on/off mechanism that comes down to familiarity breaching. We live in a perpetual vacuum of uninspired copout extremes all the while, and what you consider to be musical gold, turns into bargain bin commercial fodder with nothing to show for it even quicker. The critics get bored, you get bored, I get bored. Isn't excitement wonderful? That's a major part of just getting up in the morning. So do give this a listen if you're Electronica minded.

Some days you reject leaving bed - maybe you're off work, out of work, down henceforth, trying to face the black wall. Later a thought pops into your head that lifts your mood, and you are able to transcend space and time to enter another. "Please baby please, I'll buy you a ring" might be such a lyrical strand to Michelle Willis, singer of Three Metre Day on "I'm Like An Oak", "Coasting Notes" album opener. Akin to smoothed bark, Willis has been compared with Norah Jones by one reviewer, Beth Orton another, and there's an icy playfulness to her voice that is transcendental for emotion being gradually released, and introspective in compliment to the former. The lyric is one of several niceties weaved into the group's fabric of violin, drums, pump organ and slide guitar. 3MD play sobering - but not negatively austere - pieces with transcendental introspection pittering and pattering in flurries, like your heart will upon hearing, and finally leaving on "We Now Hope We Win".

According to their biography, late 2009 was new material time. A conglomerate of several bands previously, their recent California tour was organised by James Williamson from Iggy And The Stooges, which highlights their creative diversity. Yet at the same time, all wallflower sounding, this record. Nothing approaches instrumental raunch - it's more romanticist than that, "Reputation Girl" being the raw red herring. "This Night Is Getting Old" adapts the narrative of having "things to do" and seduces by reductionist songcraft, something which also features on "Stay That Way", one of the most immediately striking LP tunes. What ultimately wins you over is that these are skilled musicians playing music which shouldn't require skill to shape, yet it does, and the subconscious adherence to this fact commands a certain respect in your psyche of the work, and all things you notice thereafter. Roots music isn't my forte, but if I can find something to really love and grow with throughout any record, it has to be worth recommending. 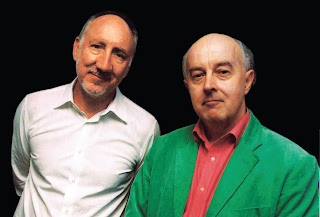 If you belittle yourself for long enough, you'll feel relieved when you stop. The case of taking on a structural misogyny paints a historical documentary for your life that never quite "was" in the purest sense. Where Lawrence Ball has transcended this principle with "Method Music", is to obtain masses of raw external stimuli with the aid of programmer Dave Snowdon, then butter it into his own compositions, co-produced in collaboration with The Who's Pete Townshend as musical portraiture. The concept originated with Pete's "Lifehouse" project, in which a website was created to process personal data from users' in unique sound corroboration. While artistic petals of Three Metre Day might wilt in the presence of electronics, they are comfortingly bastardized into ditzy-cool runabouts by Ball, who extrapolates the theoretical implications of "Method Music" into the dedication format as well. On disc one, the springboard strings of "Sitter 10" exemplify the underlying construction: method has plenty to do with humility, plus existential realities beyond ourselves. "Sitter 12" counterintuitively dons psychopathic typewriter percussion and deciduous melodies.

On disc two, the cosmic awaits via "Galaxy 01 (For The Late Syd Barrett)"; spectral synth swirls abolishing the soda pop coda, and pirouetting flashes of subconscious junk - siphoned out - provide an uplifting 20 minute chunk of space Ambient Barrett would be glad to associate with. Its timbre pokes Theremin eeriness; its dissonance is something to revel in. Wallowing has often been an emotional pitfall of long form ambiences, but Ball's stab at it - marrying chimes with 90s warptronica synthesis - has you in perpetual, lucid trance. "Galaxy 02 (For The Late Hugh Hopper)" has strings of dolphin-esque grace jumping out of the sound sphere, bobbing their heads about and back in. The Ligeti dedication, by far the pinnacle multilayered and evolving composition of this CD; a constant stream of continually tugging notation, melding each end of the journalist's alphabet, then condensing the remnants by fridge-freezer, chilly flights of instrumental fancy. A bleeping sonic area here, next a refraction transcending onto the last. Importantly clutter is minimized by a measuring-up-to-classical-inflected restraint; an Arvo Part "Silentium" comparative, fed an electromagnetism milkshake. Flute adjoins the latter half with a fluttery texture, akin to 70s freak Folk. By the end my ears were exhausted, and it's a priori you'll require proper speakers to do the refrains and weavings due justice.

"Transcendental introspection" can be seen as the development of a more or less standardised code of associations, pursuing the borderline, and allowing less close-minded terminology to be present in the web world.

Personally I have a cumbrous relationship with genreification, seeing sub styles as irrelevant in the perspective of not allowing the listener a surprise, transcendent moment or critique.

We have become accustomed to putative language that threads our collective muso-society together, and unless differentiations are made from that format, paradoxically more segregation will occur.

I hope you enjoy the releases reviewed.

Transcendental introspection expanded on Subvert Central
Posted by Muttley at 15:44 No comments: