Mick (Foci's Left) has recently released an album called 'Grumpy Love', he also runs a very interesting blog (http://www.subvertcentral.blogspot.co.uk) and was one of the backers for this issue of Futurepast Zine. I'd interviewed Mick a couple of years ago and this was a good opportunity to find out what was happening right now...

1. You recently released your debut album 'Grumpy Love'. What's the album about, why give it that title?

“Grumpy Love” is about a few things really. First and foremost it's a dedication album to my sister Jo, in the form of dialectically epic-with-longevity music that I tried to conjure to me most affecting over the longest period of time. The second transitive is a soundtrack to my life so far. Now aged 25, I have been many things in life: a cheerful infant; a reclusive teenager; a full contact kickboxer; a freelance published writer in over 10 zines; a music producer. With “Grumpy Love” I wanted to encapsulate all the passionate moments as an epicentric part and counterpoint to aurally channelled “grumpy music”. When we are grumpy, we're usually brooding over something, some hardship which makes us feel a certain negative way, or cuts us off from bearing our soul. I have constantly had this theme of not bearing my soul too much over the course of my life, so the music on “Grumpy Love” takes on a certain, sullen tone. Whether that helps the end product is open to interpretation, but as you said yourself, “it's pretty amazing”, and I take that as a huge compliment.

2. Why dedicate the album to your sister?

My sister Jo is a driving reason why I've made a lot of moves in my life, from how long I went training, to how long I stayed living with her until middle 2011. “Silence Is Golden”, a 345 sample, 3 hour collage – and still the best piece of 'music' I've ever heard – lead to a loss of stability. I realised after that I needed to move on to my own accommodation, and a trip through mental hospital a year later lead to buying a keyboard to produce to help produce the album. I still don't consciously know why I wanted to do an LP, besides having “Regurgitated Impulses (Original)” produced since the age of 17, when Jo was experiencing a tough time. But I know I had her in mind when channelling my emotions, as she means a lot to me, yet we are still quite distant from each other at times. I guess as I'd done a few EPs, (the first on Audio Gourmet, the second self-released, the third on Omni Music) I wanted to express to a greater extent what I'm about, what sort of music I want to hear that I don't hear anyone else making quite the same way.

3. Why did you release it as digital only?

The choice to release it digitally came about as a half-inconsequential decision. I hadn't really taken into account what sorts of funds I'd need to press CDs and get digipaks designed – so it's digital only for now. Heck, if I had a hundreth of the 33,000 "For The Ambient Lovers...review and mixtape archive 001” (my Subvert Central thread concerning Ambient reviews) audience exposed to and enjoying the album so they would support it I'd be able to sort out CD pressing. Alas it's not quite that simple – I'm still a very obscure artist with only 5 releases contributed to. In the Ambient and electroacoustic scene there is a surprisingly broad selection of records to choose from...naturally the more exposed the artist the greater their revenue share. I've never been about making money from music, but if I could sell enough to support funding of future projects I'd be happy.

4. When I listened to your album it felt I would have to burn it to CD to listen in my car, you could always do it that way yourself...anyway, how does the artwork link in with the album?

Yes I could always burn a few mastered Wav CDs to send to people, make it proper DIY and all that. The artwork and how it fits in...Niomi is Jo's current girlfriend and leopards have been with my parents as a means of comfort for decades – they have a cuddly leopard toy. So it seemed ideal to include the image, and plus I think it's ace, so it all worked out nicely.

5. Have you got any more music coming out soon?

I'm currently putting the finishing touches to my fourth solo EP, “Dumping The Rock”. It will be comprised of 5 tracks – the fifth a bonus for whoever purchases it on Bandcamp. Like “Grumpy Love” the EP will showcase a range of styles with a unifying theme – in this case music that disperses any of the aggression of past releases. I'll be selling it at the same price as the album – an inexpensive Â£5. I feel it's my most mature music to date but still retains a youthful edge.

6. What do you use to make your music?

I use various sources to make my music. The primary two sequencers I use are Mulab, a freeware tracker with kits of great VSTs built in. The second and essentially intermediary one I go to is Ableton Live 8 Suite. “Overdriven Terrain”, the synthesiser track you said was breathtaking was created solely there, with The Dream Machine and STS-21 freeware VSTs. But mainly I use hardware these days. My trusty Casio CTK-4200 AD 61 key keyboard produces over 600 tones on its own before I go in and edit. I then capture these sounds with an Olympus VN-713 voice recorder and resample them back into software.

7. Also, I noticed your post about a 'Police State' on Subvert Central some time ago, I was wondering if any of that works its way into your music?

As to the Police State situation, it depresses me for sure, however as my Mum says, if you're not doing anything wrong, wholesale, then you shouldn't have to worry about anything. The article in question was extremely leftist, discussing and condoning the organisation of police forces as to creating positive measures against criminals. But I like your analogy there that the police are little more than organised gangsters. I'm actually still surprised that the rules are being enforced, as it means the police might have to get off their arses and do some work.

8. I asked you to put together a short mix. You called it 'Positive Congruence' – what does that mean and can you tell me a bit more about the mix?

'Positive Congruence' arose from reading Carl Rogers' 'On Becoming A Person' psychotherapy doctrine when the British Olympic Games Opening Ceremony was on in 2012. The chapter concerning the phrase 'positive congruence' piqued me, in how to understand and open myself up to new experiences with individuals. It means transparency and honesty without being overbearing. Sounds that followed suit in their nature of being rousing only were added. There are up to ten tracks layered at once in 'Positive Congruence'. Therefore providing a track list would be impossible. I can give you some tunes and artists that were played. “Birthday Suit” by Chubby Wolf opens it; Hallock Hill's “A Burning Question (A Question Of Burning)” from “There He Unforeseen” not long after. Machinefabriek & Gareth Davis' “Oh, Doctor Jesus” post 15 minutes (the saxophone piece); Donato Wharton's “Ink Mountains” at 14:30. Barn Owl's epic “Devotion II” at closing. This amount of tracks layered at one time by me, has only been exceeded (16) in the timelesss “Silence Is Golden” 3 hour collage that I published on http://www.subvertcentral.blogspot.co.uk this year. I'm very happy with this mix, the climax at the end by Jon Porras & Evan Caminiti giving anchorage into more powerful affectations, once the listening process is over. Since it's all about congruence with a certain type of thinking – powerful affectations that nurture knowingness and trust – that the person is being understood for what he or she is.

Mick has done an excellent mix for Futurepast Zine so be sure to check it at http://www.futurepastzine.blogspot.co.uk and check his music out at http://www.focisleft.bandcamp.com - it's breathtaking

There you go, handed to you, on a plate - without the bother of having to watch any of them.

http://subvertcentral.com/showthread.php?tid=61789
Posted by Muttley at 15:45 No comments:

I am noting down a few pepper combos here, as i have not ordered from Curry Paradise, Oxfordshire, since 2014 (too far away mentally).

Some thought that it is too far away is contrasted by the fact Ahmed's curry is also in Witney, but this is quicker send.

OK - stuffed red green and yellow pepper (either or, they all taste the same), stuffed with pork and Hellman's mayo.

Or mayo of any kind would work. This works as it is a binding agent with the insides of the pepper. It also increases flavour and enjoyment of the meat, basically being a marinade if spiced or not, and works equally with minced beef.

Sweet pointed peppers also work, but these are more difficult to see a return on, because they are not round like eggs.

Of course, the peppers, are hollowed out first, some seeds can remain, but the basic criterion is it is much healthier for me than scotch eggs, and much tastier. Stuffed peppers with chicken strips or warmed ham also works. Yes, warmed meat.

This meat can be warmed up in the microwave oven, or in the case of pork or mincemeat, fried or oven cooked.

Mushrooms? Mushrooms are an alternative for veggies, and qualify the addition of herb combos to mix, such as mixed spice, allspice.

Another serving suggestion is using egg mayo filler in the stuffed peppers, or whatever you wish to use. Morrison's in UK, for instance, have a variety of fillers, including coronation chicken, seafood cocktail, cheese and onion (more savoury dish) etcetera etc. The dishes with any stuffed pepper are always more nourishing with properly cooked/heated through peppers, as the taste buds are heightened in sensation, because peppers are basically less strong chilli's that belong to the same family.

Overall, the stuffed pepper is a type of cooking implementation with a lot more to give than you, and I too, may think.
Posted by Muttley at 08:27 No comments:

Dear friends (yeah really, one of those)

I have become a women's wear designer for VIDA!


I was skeptical at first - you never really know - but they really talked & wanted 3 of 5 submissions for the site!

Vida has been an upstanding women's fashion ecommerce platform since 2015. They have a whole bunch of amazing designers on board...do I match up? I don't have a high opinion of my collage style, but it looks better here than at any other place.

The products are custom made. Like limited edition vinyl, each one is different and unique. My Turkish DE-Lights scarf is Cashmere so I understand Vida have bumped the price up of that. As to who'd wear any of these...well I would if the 'Think Positive' design was printed on black silk...I can arrange something. Every tee is silk here. There are currently 3 designs to choose (which are live)

The way it works...if you pre-order an item, it will be sent to production and custom made for you. It has my initials (MB) on the tee. Every item sold, I get 10% profit back. It does not cost me anything to design for Vida. They own the licensing authority, I own copyright.

I sincerely hope you found any of this personal post interesting. On with the show! 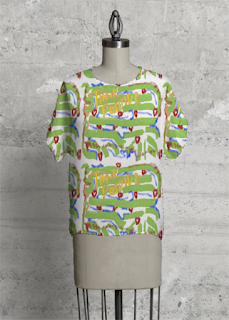 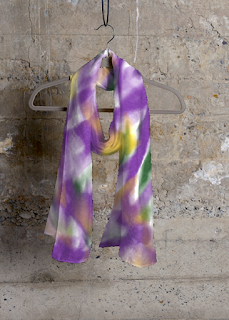