"Exit" is a soundtrack for not sacrificing entertainment – whether that be a night out, quiet time, the studious, or disappointments of chasmic proportions. There are mini movements within: powered by the lyrics of Piano Magic, we are informed "Maybe it's time to get out? We all have our reasons, we all have our doubts". Grappling with environmental stress — claustrophobia, cold brush-offs, verbal abuse, rejection — is tempered by "Exit" and its noise reduction, as a distraction that has healing intent. It's a brew rather than a formula, affirmed by the congruence of drone, guitar, voice, strings, and beats. All these tracks were and are influences on my production output as Foci's Left, who's inaugural release was on Spheruleus' Audio Gourmet imprint. I thought I'd share my aural beacon from turmoil with you.

SubVersion Stop 104: Muttley - In The Waiting Line - for www.astrangelyisolatedplace.wordpress.com

“In The Waiting Line”, contributed exclusively to A Strangely Isolated Place, is one concept from several that showcases artists that Muttley has specifically enquired to book for concerts in the future. Since an inspiring first concert watching Greg Haines (pictured), Muttley’s shortlist has grown to encompass classic artists such as Roger Eno and more recent pioneers in the form of Oneohtrix Point Never.

The result? A truly inspirational and unique mix that transports you to the front row of an ambient fans dream gig. Which artists would be included in your dream concert shortlist?" 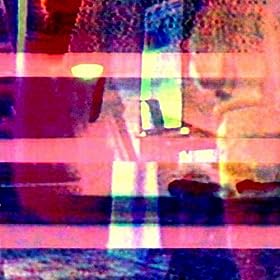 Essentially, Badmammal’s second EP, “Tapestop”, is downtempo, but is so overwhelmingly groovy, it forms a portable dance floor. This quality transcends his back catalogue, elevating everything beyond shoegazer cliche and sugar-fuelled euphoria. Those expecting shallow caricature will be disappointed. But who’d have guessed consistency going against perceptual grain?

That’s no bad thing: synths on “Another Bed I Know” chirp their chords like a backing track to an 80s Prince movie, while “Down And Up” recalls The Cure tuning up, then swept through a wind tunnel of ramshackle drum shuffles, Slowdive-in-a-blender guitar figures, the changeable riffs rapturous and perfectly juxtaposed to “Go On”, where space blossoms, handclaps and shakers adorn a pumping beat, simple and effective melodies captivate like chicken to a hungry bull terrier, always awaiting the next move from the speaker. Breaking down on angelic pads, shifting your focus to Badmammal’s uncannily futuristic sound combinations, the expectations suggest a staple not quite yet tacked; a goal on its way to completion.

The guitar is a malleable instrument, mainly entrenched in the field of psychedelia. Badmammal’s relationship with electronica comes to the fore, Orbital-esque, on “Short Days”, where guitar parts are looped over a crisp rhythm, timbres glossy, structure slowly forming new layers, as is so typical of his laid-back approach to production and life. For the listener, satisfaction is reliable if you’re stressed from a day of indecision, unfulfilled objectives, fractured friendships or whatever obstructs a to b. The five tracks on “Tapestop”, albeit not life-altering, are hugely enjoyable slices of funky electronica, and for fans of Bonobo, Ninja Tune and even Flying Lotus, should be duly investigated.

Purchase: Mp3 release
Posted by Muttley at 08:37 No comments:

A string is like an arrow to the heart – it can either puncture the spirit or carry with it magical emotive absorbtion. Whether in a quartet, quintet or cameo instrument, its sound can alleviate, act as a sobering slap to overcast mood, or cut through the murk of occult settings. Think chamber music for a context where the string makes everything humane, then paradoxically alien if manipulated in the right scale. Or consider disco for inclusivity of strings that race on their own idiosyncratic merits; sometimes painting textures of indeterminable origin; at others a cornerstone that respects past as much as present.

It’s an open book that cross-pollination of the string can be threatening – control and aspirations thwarted by simple but nonetheless aggravating formalities, whereby strings and film is not a relationship with zero elasticity. From Ennio Morricone’s spaghetti western scores to Thomas Newman’s “Any Other Name”, where piano and string temper each other like childhood sweethearts, string effects have developed countless harmonic bargaining.

Max Richter is a composer with an ear for a dime a dozen in this sense. His latest opus, “Infra”, intended as the soundtrack to a ballet at The Royal Opera House in London, sheds verbose conceptual baggage and is realised as a standalone album, one that, if you listen right, works as an appetiser to nimble steps that extend beyond choreographed dance, and into your own world of routines, chores, highs and lows.

“The Blue Notebooks”, Richter’s most acclaimed release, was all about soaring instrumental cadences and polished musical explanations. “Infra”, forgetting its earlier industrial life, represents an offroad abode where the dulcet (strings, fuzzy piano) and intriguing (interlude electronics, several tracks titled “Journey”) hold hands, and are as charming as an unkempt box of photos dusted off, and given fresh existence on your mantlepiece.

Discover where to see it performed live on Subvert Central
Posted by Muttley at 06:43 No comments:


“So We Can Sleep”, finishing the July mixtapes, sighs for individuals dispersing into less crowded constellations. As it lengthens, tunes layer to relieve each other’s characteristics. These temporary alignments, and their intensifying and diminishing moods are followed by Lymbyc Systym’s high-velocity “...So We Can Sleep”, a scorching but unharmful conclusion to the drones and fogged up timbres, guitar ambience proceeding nestled in organic terrain.

All Muttley mixes on SubVersion are SC Affiliated, by way of the 15 Minutes Of Fame Mix Series.