SubVersion Stop 7: Tings What I Listened To Today

I hardly ever have the inspiration to write at length about any particular music. Maybe I'll listen to something or other, like it, give it a metaphorical thumbs up, or a pictorial one if smileys are available, and that's enough. Which is what such threads as currently on your stereo are for: you list something that's currently on your stereo, or has just been on your stereo, to include other people in the listening experience, however tangentially. And maybe a name in a list does resonate with someone and they wave back, metaphorically or pictorially.

But then at other times you might want to say a little bit after all, to encourage people, to lead them on to listen to that something themselves, subsequently on their stereos. But to say only a little bit; no long evocative article taking people by the hand or anything. (As I said, I hardly ever have the inspiration to write anything like that. I just stare at the blank screen for a while and then go away and do something else.) But yes, just a little bit. So I started another thread on tings what I listened to today. It's a somewhat diffident title because, well, why should anyone care what I listened to, today or any other day? And yet sometimes I want to say a little something anyway. So I did, and do, sometimes.

And what I listened to today was:

Before the Revolution: A 1909 Recording Expedition in the Caucasus and Central Asia by The Gramophone Company.

Extracted from 78s stored at the British Library, it is merely an extract of the work of recording engineer Franz Hampe, who made over a thousand recordings of whatever and wherever on a 5000-mile trip across Central Asia in 1909, armed with whatever obscure technology they used back then.

For instance: track 19, recorded in Skobelev, with tanbur, two dutors, chang, gijak and doira. I don't know where Skobelev is and I've never heard of any of those instruments (well, perhaps the tanbur, if it's a variant of the Turkish tambur), but they made a fine sound together somewhere back in 1909. And the sound quality isn't bad either.

(Thanks to Naphta for leading me to this one.)
Posted by Jonathan at 06:23 4 comments: 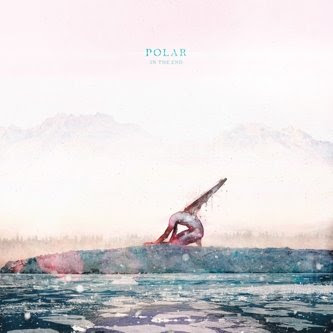 Their initial LP project, Warm Communications and experimentation go together ala TV and video: one broadcasts forward-thinking ideals, the other embeds itself in the recordings of the past catalogue. His first in six years, the Scandinavian's co-produced, recovered-from-tinnitus comeback album - what's enthralling is how good it turned out.

Syncopated powerhouse "Almost And Beyond" opens boldly, melodically nodding to "37 Degrees And Falling" Polar on Certificate 18. "End Of The Story" ties delicate vocal samples to a sly, heavy-suction drum section, and chirping, whirling atmospherics, coming off like the ghost of Ed Rush & Optical (when they were good) slipping through a contemporaneous wormhole, filtered through a cheesegrater and displaying the subtle, sinister funk that won over so many fans originally. "Another Time" prolongs this theme, with a bassline that wriggles like a wild snake through a maze of long grass. Busy on the percussion, big on quirkiness, it escapes triteness by a level of attentiveness that is signature to Polar productions.

"Nothing Personal" conjures imagery of Boards Of Canada and Autechre sharing seats on a gut-churning rollercoaster, only to be strapped in by Luke Vibert, handed chocolate milkshake and honest synth squiggles. The result is a sublime mix of off-kilter harmonics and dribbling digital synthesis.

"I Don't Remember" collides its intricate details akin to dodgem cars in an egg whisker, the drums accentuating the glitch-punctuated compartments of sound throughout. "Rendition", all space-age synth ditties, is the pick of the collection - if your agenda is to have drums incorporated as a major part of the cut. This and "High Voltage" are vintage Polar, employing intermingling textures with some superbly chopped, "tighten up" tenacity.

"In The Middle Of Somewhere" is "Out Of The Blue"-esque Polar fattened up and simplified, but here still maintaining your interest by its quality of ingredients - it's music beyond just a DJ tool; also thanks to its shorter-than-five-minutes length. "3 Liter" is a near continuation of once-album-of-the-week-at-boomkat producer Naphta's "Are You Ready", if it was dipped in a lagoon of syrup - this concoction oozes vitality and poise above the sub cushion. "Static", one of three downtempo cuts on this digital release, offers an inexorable hiphop bounce. "Stepping Out" is, not surprisingly, a militant stepper tune, but collates just as much subtlety as its peers, rinsing out the two-step break but never sounding too regimented or contrived.

These tracks, built like throbbing nuclei, are elementally leftfield, however never too bulky for the litmus test. So becomes "Uneven", filled with gangster electricity that's part horror movie, part Tron - like the rest of the LP, its construction is easy to follow, yet deviant, the message luxuriously translated, the sentiments easy to relate to. As an accompanying bonus to "Lo-Fi Epilogue", you'll get the seductive "Chula".

As with an empty suitcase, the contents are awaiting to be taken somewhere exotic, but not to serve as hollow exoticisation; all saccharine show with no natural salt and pepper. In the end, here, Polar has created recordings that challenge the listener's expectations, but also have the audacity to appeal to the jaded junglist - or rather, armchair socialist contingent; complaining of no beats shaped for the dancefloor as well as headphones. It's like an unworn dressing gown when you're fresh out the shower: warm, inviting and stable. And as such, is highly recommended. 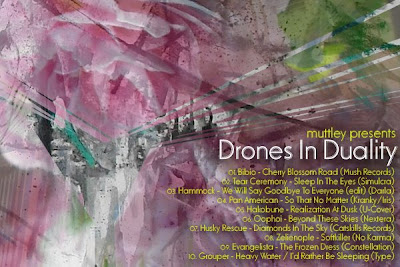 "Drones In Duality" is the first in a series of mixes dedicated to Bridewell Gardens, which I visit every week to engage in therapeutic conservation work. The name is a reference to the double meaning properties of each track title, and the transference of a gesture in two different timeframes - before mucking in, and after a days' graft.
For instance, Bibio's "Cherry Blossom Road" encompasses walking down roads adorned with flowers, to and from the bus trip to Bridewell, while "Sleep In The Eyes" identifies the product of doing much work on the premises, or getting cobwebs out on the journey in. Hammock's "We Will Say Goodbye To Everyone" nods to the friendly atmosphere I've encountered, and the desire to wish well each person I meet there. Pan American's "So That No Matter" curtails an extended metaphor for "so that no matter what problems I face, I can get through the day, with help from my friends and family".
This is segued into Hakobune's "Realization At Dusk", which symbolises the enjoyment factor I weigh up the evening prior, and welcoming in darkness post-assignments. Oophoi's "Beyond These Skies" is the subsequent result of thinking forward, to what can be sentimental gold beyond nostalgic trifles. Then "Diamonds In The Sky" arrives to calm the listener: "They shine in the night / The diamonds in the sky / The sweet dreaming girl's paradise". "Softkiller"'s incomprehensible lyrics act as the undertow to ethereal guitar noodling and hushed chants.
Grouper is juxtaposed with the grainy metamorphosising of Evangelista to end. All in all, "Drones In Duality" is a 23-minute endeavour into fresh ground for me. There's lots of drones, but these are counterbalanced with an accessibility from the vocals and brimming harmonies. Next up: "Time Heals All Wounds". 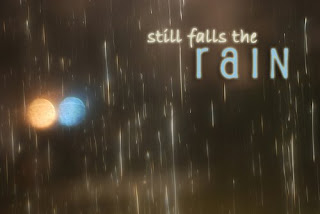 I'm delighted to present a SubVersion exclusive from Dave at low light mixes: "Still Falls The Rain". In his own words:

"I love the feel of rain, the smell of rain and especially the sound of rain. So this mix makes generous use of field recordings of rain & thunderstorms.
I used a classic low light mixes method of choosing the tunes, all the tracks have the word "rain" in the title. In order to reduce the number of tunes to sift through, I searched for everything I had with "rain" in the title and then chose songs that worked well with each other and with the rain sounds. I hope you enjoy it."

Be sure to check ""I Love The Rain", the "Still Falls The Rain" companion. From low light's blog: 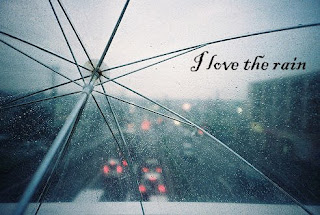 The transition from spring to summer brings two new mixes from Low Light Mixes central command. We've had a fair amount of rain lately so both mixes are "rain" mixes.

Rain evokes so many memories and emotions, it's a great theme for mixes. Using field recordings really helps hold the mix together. I try not to over do it with the rain sounds, hopefully it works well.
This first mix is a vocal mix, well mostly vocal, there are three instrumentals hiding in there. All the tunes have the word "rain" in the title. It was fun discovering tunes I did not know very well, like The Decemberists track & the cut from Susanna & The Magical Orchestra.
TRACKLISTING

"I Love The Rain" and "Still Falls The Rain" make up low light's fourth and fifth instalments for the "15 Minutes Of Fame" mix series. I will have a set exclusive to his blog, titled "Drones In Duality", posted shortly.
Posted by Muttley at 06:39 No comments: