Tickets available from: http://www.flexbar.nl
Please send a mail to info@ichione.com if you're planning to join dinner at 21:00.

A word is like an electrode connected to the mind. If you keep sending the same stimulus through it, there is bound to be some kind of response created - some effect that comes into being. Imagine the light of a firefly soaring across the ocean, its destination confirmed. Lucky for some, they gather it would land at the Flexbar, Amsterdam, on 5th June 2009. This is the venue for the 5 Year IChiOne Anniversary, and a testament that when punters invite themselves, the night will shine, before darkness prevails.

"We did not have a timeframe in mind, we just started to throw parties with the intention to prolong, and bring a dying culture to blossom and transcend" notes Rico IChiOne, one of three passionate initiators, with girlfriend Kat, and brother Ray. IChiOne, Rico writes, "is a term made out of 3 components: mind/change/formless, subtle energy/matter/form, one which stands for the unity or mutual dependency of mind and body, no form and form. We like to challenge our audience with our line ups, support artists and labels we believe in, and motivate other promoters to think a bit more outside the box." Certainly, the 5th Year Anni welcomes a gradually widening circle of supporters; whereas frequent host Gisele, and MC Quest One return to guest the show.

Previously titled Subversive Renaissance, the IChiOne events offer a cosmopolitan, laid-back approach to clubbing. There are no headliners - everyone on the line-up makes a greater sum than the parts. In print and keyboard, they're regarded as one of the most progressive nights in Europe, making first place at the Dutch drum & bass awards, as well as receiving hearty support from the Dutch scene and abroad. On internet radio, IChi Ryu receives 200 to 250 listeners and growing, whereas in the club setting, it's where cultures, genre-hoppers, uncategorisable mavericks, and audio-visual syntaxes can bear their souls for all to see. Fresh food is supplied, drinks are cheap, and vibes - best of all - are plenty.

First on the line-up is Phil Source from the massively influential Source Direct, and proprietor of Vampire Records, a label themed on the nocturnal behaviour between clubbers and vampires. Dealing a session of Blue Note-inspired beats, and half responsible for mesmerising classics like "Secret Liasons", "Exit 9" and "The Crane", for fans of '95-'97 d&b splendour, it's a sure fire recipe for success.

Second comes Paradox. "I'll be praying the 13 year old floppy disk data will load and I'll be returning to some Reinforced classics alongside some new Paradox album material, exclusively for IChiOne." he tells us. "All the IChiOne events have good memories for me and it's always a pleasure to return to Amsterdam. It's been 3 years since the last Live PA so I'm really looking forward to it!" Enabling him to run four labels and bring through a myriad of underexposed producers in his wake, though the term 'drumfunk' was originally coined by JMJ And Richie pre-2000, it has assisted the blossoming of the d&b leftfield, with producers including Fracture & Neptune, Macc and Fanu owing much publicity to its origins.

"I just felt that I could be myself." says Macc of his live drumming showcases at the Pakhuis, IChiOne's previous abode of four years. "When you're among friends like that you can just do your thing, do what comes naturally. It doesn't really matter exactly what you are doing, just that you are there doing it. I sincerely and genuinely love them as promoters and as people, I mean it."

When asked what the international perspective means to Fanu, he comments: "I've played there twice, and it's always been a success, and there's loads of people who come there for the music - and that's what we want! I cannot think of any other night out there that brings in artists from such a wide variety of countries. IChiOne have their eyes and ears open for what's the very prime in contemporary jungle (and other forms too!) and brings its creators and DJs to their events. They're doing an amazing job for sure, and I have a huge respect for them."

He leads into a discussion involving Basico, IChiOne's resident cook... "What also separates IChiOne from other events is the food selection. Seriously, how many events do you know with their own chefs? You know you're going to be hungry sooner or later after downing all that liquid or smoking something, so that's a BIG plus!"

Like a rubiks cube with hidden solutions, the amalgamation of sensory treats grants extra magical dimensions. Next, Darkestral Recordings overshadowed a high quantity of d&b releases in 2007, with two 12's: "Comanche" / "The Chamber", and "Output 1-2" / "Pacific Heights", by Instra:mental and Jonny L. Instalment 1 reached 26 in Boomkat's "Top 75 singles of the year" pile, and was driven by the brooding, collaborative technicalities of Source Direct, with "Yo Bitch" in 2001. Billed as "deep eclectic", Instra:mental have guested ICHiOne before to critical acclaim, and this set serves as another helping of beans for the hill to d&b heaven.

Rounding off the evening are residents Big Eye, Chillum (Subway), Silvahfonk (Bassground) and Pressure (Naked Lunch). I got to speak with Pressure about his favourite memories from IChiOne to date: "The night Shackleton and Appleblim played, it was a turning point for my music direction, and it also inspired me to start a label." he remembers. Alongside the resident VJs RoboRant, GoTo10, Lennart Visuals, Anikamikaze and Gabriel for graphic design and slideshows, their intention is not to oppress the viewer, but to create a temporary space in which beauty and tranquility are allowed free reign.

Not only do we get all this to savour, Paradox will be joined by Audio Buffet's DJ Trax from previous Mixrace collaborations, on audio-visual duties. Upon interviewing Dave in early 2009, he had this to say: "I love IChiOne! Ray, Rico and Kat are without doubt the kindest promoters in the business. I really enjoy going over and spending time with them. I never just fly over, play, and come home the next day. I always come back with a fresh look on things."

Representing as a Subvert Central Official Event, Rico explains his motivations for the SC affilliation as: "the SC ethos, the board which stole my heart, all the good music and friendships shared". Indeed, the SC link guarantees an alchemy by which the end result is given identity, life and form beyond the event. It is met with an array of leftfield d&b labels, some also releasing non-d&b, and a pluralist, open-minded outlook from do-good individuals. Streamed online at jungletrain.net via Arnie and Josh Hill, they remain faithful to the notion that the firefly may stray from the central provenance, but it won't be blown out to sea for a long time to come. As written on the IChi MySpace, "Our goal is to enrich, broaden and transgress the spectrum and perception of drum & bass and affiliated music traditions, stimulating cultural exchange." On my October 2007 visit, moving room to room, I heard electronica transformed into multiple sensations. Andy Stott and DJ Trax laid down a lot of heat early on, while Alpha Omega closed to a radiant reception.

The night has a dual purpose underneath the veil: to renunite appreciation from past contributors, and to explore untapped ground with new arrivals, all set amongst not decayed glamour and gloss, but a fresh outpost for sounds to flow through. My advice is simple: make the trip over, and prepare to be given a mental souvenir of enduring value. Needless to say, I've already booked my flight.

Riding the waves of atmospheric drum & bass, if soundsurfer's aural travelogues go unnoticed to the mainstream sector of the scene, it makes "Science Friction" no less precious. Recorded in 2007, it's a special from The Dastardly Diaries' vaults. Strap yourself in, and let the fun begin, with enchantress signs, technoid bleeps and a double dosage of galactic funk. Global connections - forthright.

soundsurfer: MySpace
atmospheric-dnb.de forums
Posted by Muttley at 09:43 No comments:

- A joint blog with several contributors
- Aggregate-filtered to the highest degree
- A place to share thoughts and dreams
- Anywhere, any time.

Founding The Dastardly Diaries, I have come to find that a PDF webzine can be exhausting work, not everyone takes to the format, and that I can't make blogs on MySpace forever. With SubVersion, anyone on Subvert Central and beyond can contribute. I will happily work as an editor, provide suggestions and pitches to entities, and write up what's going down my end.

If you're a DJ who'd like to contribute a SubVersion guest mix, I can direct you to the 15 Minutes Of Fame Mix Series, and the Subvert Central Podcast.

If you're viewing this and would like to contribute a post or article, or have general enquiries about the nature of this work, my contact address is muttley_subversion@hotmail.co.uk 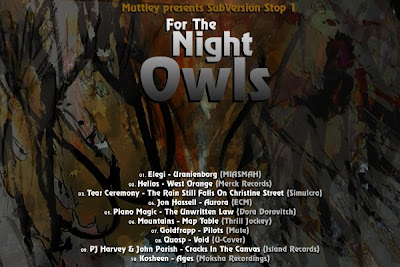 "For The Night Owls" is dedicated to my oldest uncle, who died of an inoperable brain tumour on April 19th 2009. In January he was diagnosed with CNS Lymphoma, and had everything from chemotherapy to steroids to try and shrink the piercing mass. Unfortunately this wasn't successful.

"For The Night Owls'" closer, "Ages" manifests the fragility in which relationships can succumb to. Before this, "Cracks In The Canvas" by PJ Harvey and John Parish conjoins the directive of lost motion: "How do we cope with the days after a death, empty days, nothing left, not even a funeral?" Such questions are not predestined notions; they make us analyse our whole purpose. My sincerest condolences go out to my uncle's nearest family at this time.
Posted by Muttley at 09:11 1 comment: