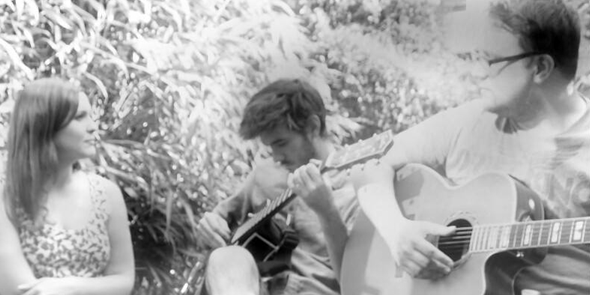 "I know Friday night at a folk club is not a normal place to go" posits Little Red songwriter and night promoter Ian Mitchell in the headlining of this All Will Be Well label launch gig. The aching lack of affluence towards intimacy in a hyper-accelerated city creates a cause for discomfort and movement. It's one thing feeling safe in a packed club but another feeling like you really belong, which is a quality Mitchell and co elucidate on my gig of 2014.

Speaking to Ian before the event, Gus Hewlett, a folk guitarist equal parts Bill Frisell and James Blackshaw is said to have drum'n'bass chops, a contrast that couldn't be anything more sonically different tonight. Through a generous 45 minute length Hewlett hacks at his strings in sophisticated fashion, adapting a Bob Dylan piece for his second tune and elsewhere trailblazing an arpeggio wedge to gently impose his semi-auteur ear for a melody. Worthwhile, in short.

Stuart Clark is a commanding presence mid evening, an arpeggio-heavy storyteller in the vein of "Lady Grinning Soul" Bowie with just guitar for company. Disappearance's rhetoric echoes on one of his later tracks, where stop-start rhythms fuse with a folly towards lonely abstraction. It's not all reverbed abandon though, as he swoops and swoons about subjects as broad as nature creating stopgaps between time and place. There is a definite sense of human body spotlighted. Pristine playing, gently crystallising voice over instrumental backbeat. The audience are generally at ease by a paradoxically uneasy set. One to watch.

Opening with drum-free, acoustic "Cures", the vocal interplay of frontman Ian Mitchell, producer Ben Gosling and the elusive female vocalist parries inflections from Finn and more contemporarily Fink, but is sweet-natured enough in lyricism, "names carved in a tree"-esque as they sing to engrave itself onto this reviewer's memory. It's a tale about where two lovers first met, and the usual bushy beard, folk-centric influence in context of there being woods that can lead either lover astray. This leads into "The Garden", the triplet acoustic, vocal assemblages making things "wrong to right" - here the sound carries further than the "face melting" joke Mitchell coyly nods to later in the performance, about the material not being wall of sound enough for the Friday night gurner massive. "What Say You?" resonates stronger, the lead track on "Sticks And Stones", what Mitchell dubs to me as an EP on the night, even though the 9 CD tracks are filled out naturally for full length status.

Little Red definitely sound like a very new band, but instead of amateurish triptych on behalf of the singers and instrument players, they form a cohesive whole not dissimilar to Duotone or XL's Blue Roses. They close post-"Chapters" (a track from their forthcoming record) with "The Boxer", where Ian sings "I'll still be coming back for more" after metaphors for being a broken man. Given the right studio treatment of the exciting live incarnation, Little red could have a rosy future, and close this night so finely.